See also Logopolis. An emergency power booster and a relocation device see The Krotons are also mentioned. The Land of Fiction is controlled by the Master under the directions of a computer master brain, although the Master states that there is an 'intelligence' behind the Land. Its plan is to replace the ageing Master with the Doctor and transport mankind to the Land of Fiction thereby leaving Earth uninhabited for the master brain to 'take over'. The Karkus a Germanic superhero from the strip cartoons in the 'hourly telepress' is from the year Zoe is a follower of the Karkus' adventures.

The Karkus' anti-molecular ray disintegrator gun is, according to the Doctor, 'scientifically impossible'. It promptly disappears. Zoe refers to her home as simply 'the city', which is briefly seen [It has been suggested that the White Robots and Tin Soldiers are Jamie and Zoe's subconscious representations of the Cybermen and the Quarks if, as Derrick Sherwin intended, this is a 'dream story'. The TARDIS reforms and returns to ordinary space and the next story starts immediately with no reference to the Master, who was going to be taken home.

His non-presence indicates that episodes two to five of this adventure don't take place at all, and are a dream brought on by whatever is outside time and space. Escaping from Dulkis, the mercury fluid links begin to vaporise 'This Although the Master is never named, it is strongly implied that he is Frank Richards, creator of the popular Billy Bunter character of children's fiction. The Master states at one point that he wrote the adventures of Captain Jack Harkaway in the Ensign comic; in reality, it was Richards who wrote these stories. Peter Ling himself had also written for boys' comics.

The costumes used for the White Robots had been black and borne identification numbers on their chests when originally seen in the Out of the Unknown play The Prophet.

Writer - Derrick Sherwin Derrick Sherwin, as Doctor Who's script editor, received no credit for writing this episode, which thus became the only episode in the series' history to feature no writer's credit on screen. The combination of disturbing images Jamie having his face taken away , superb literalism 'When is a door not a door?

Doctor Who, with its highly flexible format, was able from time to time to present a story that could be considered 'experimental'. The Mind Robber is a good example of this. It is often compared to the third season story The Celestial Toymaker and also to the eighteenth season story Warriors' Gate, although in that case the main similarity seems to be that the action takes place partly in a white void. Both adventures pit the Doctor and his friends against some initially unseen and intangible force; both involve them being forced to solve puzzles; and both present the possibility of the Doctor having to stay in his adversary's domain as the ultimate threat.

This draws more on the Doctor's mental resources and hence makes for a far more interesting story, as he solves riddles and puzzles, such as replacing Jamie's face. Quite a stroke of luck that Frazer Hines should be unavailable during this story, since the necessary rewrite is indistinguishable from its surroundings On the downside, The Mind Robber is a bit of a jumble. Principal writer Peter Ling has thrown into the mix a large number of disparate elements from all manner of works of fiction: nursery rhymes, Gulliver, clockwork soldiers, Rapunzel, a superhero called the Karkus, a unicorn, pirates and so on.

Dramatic scenes occur at the end of Episode 6 in which, courtesy of trick photography, the Doctor and Salamander are seen on screen together. The serial is so under budget that Denes is kept prisoner in a corridor.


In episode five, Bruce similarly notes 'You don't really believe I came here with just one guard, do you? Who Salamander'. He also appeared as Salamander in Episode 1, but was credited only as 'Dr Who'. Griffin the chef is wonderful - it's a pity we don't see more of this most ordinary person in Doctor Who - and Benik is the campest character in Who, a much more contested award.

The story is edited really badly, so characters leap from scene to scene interrupting each other. Troughton's fun villainy apart, it all feels rather irrelevant. Not on a BBC budget.

And yet one has the suspicion that David Whitaker had this in mind all along. Salamander is definitely a graduate of the Blofeld school of villainy, with perhaps just a touch of Scaramanga about him. Many of the plot devices are pure [and] the whole format seems to be leaning that way. Jamie is presented as a Bond substitute incredible, but true! The intrigue and plot complexity, not to mention the humour and the general feel, closely resemble numerous Fleming tales, or perhaps more specifically the films.

In a season so full of monsters, it was surely a good idea to pause for breath and replace a new monster with an ingenious new idea - that of Salamander All right, so we know that Australia was actually Littlehampton The scripts are indeed quite good, given the limitations within which they have to work, and feature some typically sparkling David Whitaker dialogue. Jamie and Victoria are admittedly seen to act somewhat out of character - giving the impression that, for the sake of the plot, they have been shoe-horned into roles for which they are not really suited - but there is some good material for the Doctor and, as Patrickson noted, Troughton's dual role is very well handled: 'The dual role was a real field day for Troughton Playing the lovable clown must have palled somewhat [by this point], and it is obvious from his acting that it was nice to play the smooth, deceptive villain for a change.

Particularly memorable is the scene at the end of the story in which Salamander is sucked into the time vortex through the open TARDIS doors. In the final analysis, despite attracting some favourable comments, The Enemy of the World must still be considered the weakest story of the fifth season, and one so markedly different in style from the others - most obviously in its lack of alien monsters - that it really sticks out like a sore thumb. 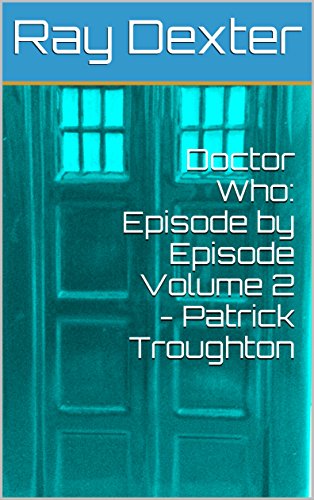 Home Explore the BBC. This page has been archived and is no longer updated. Find out more about page archiving. The Classic Series.

Initially, the relationship between the Second Doctor and his predecessor was unclear. In his first story, the Second Doctor referred to his predecessor in the third person [1] as if he were a completely different person. His companions Ben and Polly are at first unsure how to treat him and it is only when a Dalek recognises him that they accept that he is the Doctor.

Ben and Polly left together when the TARDIS landed at Gatwick Airport on the same day they originally left with the First Doctor, after they had stopped the mass kidnapping of tourists by shape shifting aliens. The Doctor used the situation to engineer a Dalek civil war that seemingly destroyed the Daleks forever.

However, Victoria's father was among the casualties. Now an orphan, Victoria chose to accompany the Doctor and Jamie on their travels. Although she felt great affection for the Doctor and Jamie, she was never able to completely come to terms with life in the TARDIS and the constant danger that resulted.

She eventually chose to leave after the events of Fury from the Deep and was adopted by someone in the 20th Century. The Doctor was then joined by Zoe Heriot , an extremely intelligent woman from the 21st century, who helped defeat the Cybermen attack on a space station known as the Wheel. During his second incarnation, the Doctor confronted familiar foes such as the Daleks and the Cybermen, as well as new enemies such as the Great Intelligence and the Ice Warriors. It was during this time that he first met Alistair Gordon Lethbridge-Stewart , in the tunnels of the London Underground.

The Doctor reteamed with him to defeat an invasion of Cybermen in league with industrialist Tobias Vaughan. The Second Doctor's time came to an end when the TARDIS landed in the middle of a warzone, created by a race of alien warlords who, with the help of another renegade Time Lord the War Chief, progressively kidnapped and brainwashed humans into becoming soldiers for them, hoping to use the ones who survived to conquer the Galaxy. Although the Doctor was able to defeat their plan, he realised he would be unable to return the human subjects to their various original points in Earth's history.

He therefore contacted the Time Lords , sacrificing his own freedom in the process, and despite an attempt to escape was forced to return to his home planet. He was then put on trial by the Time Lords, for breaking their laws of non-interference. Despite the Doctor's argument that the Time Lords should use their great powers to help others, he was sentenced to exile on 20th century Earth, the Time Lords forcing his regeneration into the Third Doctor in the process.

Jamie and Zoe were returned to their own time, with their memories of all but their first encounter with the Doctor wiped and the secret of the TARDIS was also taken from the Doctor. Due to what would appear to be continuity errors in Troughton's later appearances particularly in The Two Doctors , some fans have speculated that the Time Lords used the Second Doctor as an agent after the events of The War Games , and that he did not in fact immediately regenerate and enter his exile on Earth.

This theory of continuity is described as "Season 6B". According to script editor Robert Holmes , the Second Doctor's missions for the Time Lords took place prior to the events of The War Games : "they 'framed' the Troughton Doctor and got him to do various things for them, and then hauled him up in front of them on trial — like the Americans persecuting McCarthy". The Second Doctor has been nicknamed the "Cosmic Hobo", [7] as the impish Second Doctor appeared to be far more scruffy and childlike than his first incarnation.

Mercurial, clever, and always a few steps ahead of his enemies, at times he could be a calculating schemer who would not only manipulate people for the greater good but act like a bumbling fool to have others underestimate his true abilities. In The Evil of the Daleks , he coldly manipulates Jamie into trying to rescue Victoria thus setting in motion the Human Factor tests and is unsympathetic when Edward Waterfield tries to apologise for his collaboration with the Daleks.

Despite the bluster and tendency to panic when events got out of control, the Second Doctor always acted heroically and morally in his desire to help the oppressed. This Doctor is associated with the catchphrases "When I say run, run! Troughton's costume was the result from discussion between the actor himself, producer Innes Lloyd , and script-editor Gerry Davis.

In his first two stories, the trousers were orange and black two-inch check. He also tended to wear a stovepipe hat and pixie boots. The actor denied suggestions that his distinctive mop of jet black hair was a wig.